The History of Lucille’s

The original Lucille’s station was built in 1927. Lucille and Carl Hamons purchased the station and motor courts on Route 66 near Hydro, Oklahoma in 1941. The station was truly a family business. The living quarters and the business were in the same building.

Three children were born to Lucille and Carl. Their names were Delphia Dene, Carl Jr., and Cheryl. The construction of the interstate highways was a crushing economic blow to towns and businesses, which derived their livelihood from the highway travelers. With the decision by the State of Oklahoma to put up fences along the highway to block off access to the interstate except at desig- nated locations, the Hamons family struggled with the decision of whether to stay open for business. 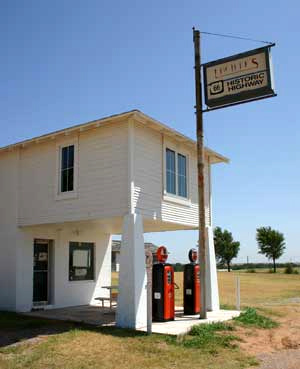 In 1992, the 66th anniversary of Route 66, the Oklahoma Route 66 Association gave Lucille Hamons a special recognition plaque for her 51 years in business. In July of 1997, a book signing party was organized by Mrs. Hamons’ family to announce Lucille had become an author of her biography, Lucille: Mother of the Mother Road.In the spring of 1998, the Oklahoma Historical society voted to put the Hamons’ station on the National Register of Historic Places.

Lucille Arthurs Hamons passed away in her home in August of 2000. She had remained in her home and her business along the shoulder of Route 66 for 59 years. She enjoyed the many visitors who traveled Route 66 to her doorway. She never got tired of sharing her stories on America’s main street.